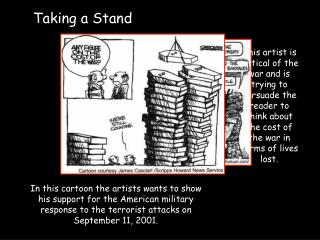 Taking a Stand. This artist is critical of the war and is trying to persuade the reader to think about the cost of the war in terms of lives lost. In this cartoon the artists wants to show his support for the American military response to the terrorist attacks on September 11, 2001. Taking a stand - . it’s a gallery walk – yeah!!. you remember the drill— it’s inference making time you have 1

Lesson 1: Vocabulary and Taking A Stand - . gsa. do now. on the worksheet given to you: circle the appropriate words and

Taking a Stand: Equal Rights for Women - . quick chat. partner up with someone nearby and share the

TAKING A STAND FOR OLD MEDIA discoveryPR BY ALLYSON LOOTS - . objectives. raise awareness off the position of the new

The FeelGood 5 Taking a stand for the end of hunger - . notes to facilitator: this self-guided journey should take 20-30

TAKE A STAND! - . an introduction to debate and argumentation. who are we?. the up debate society is the official

Take A Stand - A growing problem - bullying. a presentation discussing the current events and possible solutions to