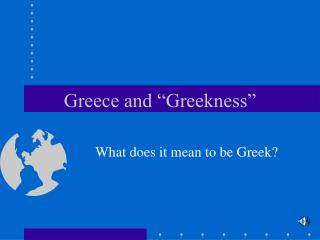 Greece and “Greekness”. What does it mean to be Greek?. Greece. The Remains of the Past Lead to the Present. Location Asks the geographic question: Where is it?. Two ways of describing the position and distribution of people and places on Earth’s surface. Absolute location on Earth February 7, 2014 - . label the greece and asia minor map with the key places and features. then, color the water blue.

Where is Greece? - . sunny greece is 1,500 miles from england. it’s capital city is athens it is famous for its