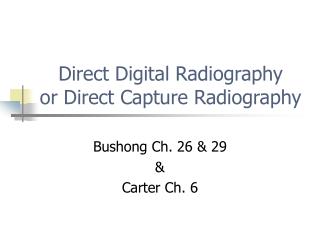 Direct Digital Radiography or Direct Capture Radiography. Bushong Ch. 26 & 29 & Carter Ch. 6. Late 1990’s. A new approach to imaging appeared DR or DDR or Direct Capture imaging At the moment departments can’t go all DR they must still have F/S or CR. Do you know why?.

Digital Radiography - . anas athar, dds. digital image. definition: a digital image is made up of binary language of

RadioGraphy - . by alia jones. 5 main questions. what is a radiographer and what do they do? what are some of the