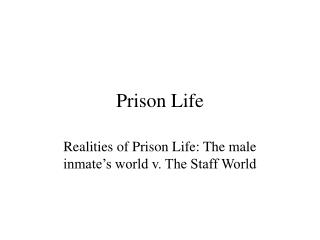 Photosynthesis: Life from Light and Air - . energy needs of life. all life needs a constant input of energy heterotrophs

King Lear ( 5.3.9 ) - Name the play in which the following quotation appears: &quot;come, let's away to prison; we

GANG MANAGEMENT - . 1.1. a clear and present danger. a large amount of prison violence and crime is attributable to gangs