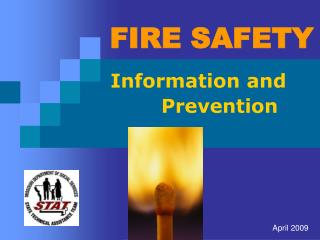 FIRE SAFETY. Information and Prevention. April 2009. Training Objectives. Identify facts about house fires Learn numerous ways house fires can be prevented and be able to teach these tips to others. Statistics. Fire Safety - . each of these three elements must be present at the same time to have a fire. a fire will burn until one

FIRE SAFETY - . fires can either be extinguished by smothering the flames with a fire blanket or clothing ( removing the

FIRE SAFETY - . keeping your home and family safe. fire safety. in the event of a fire, it is important to remember that

Fire Safety - . at the conclusion of this training, the trainees should be able to: discuss how to protect patients,

fire safety - . in the event of fire. call point. operate call point close doors do not run follow the exit signs go to

Fire Safety - . fire is. a form of a chemical reaction that involves the rapid oxidation of combustible fuel (material)

Fire Safety - . aims &amp; objectives. to ensure that designated colleagues are aware of their role when the alarm

Fire Safety - . fire alarm: in the event of a fire alarm activation a continuous bell will sound. upon hearing the alarm

Fire Safety - . university of n orthern c olorado. how to move forward/backward when viewing this slide show. to move

FIRE SAFETY - . introduction. all health care professionals should be trained in fire prevention and in first-response