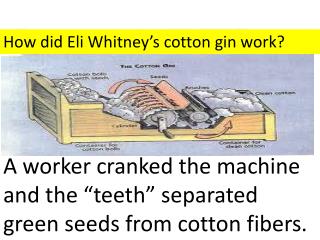 How did Eli Whitney’s cotton gin work?. A worker cranked the machine and the “teeth” separated green seeds from cotton fibers. Why did southern cotton planters rely on the region’s rivers to ship goods. The lack of roads made shipping by land very difficult. Life in the Cotton Kingdom - . the rise of cotton in the south, the domestic slave trade, and the life of slaves in the

Introduction: - Explain eli whitney’s cotton gin  and its effects. including, on the emergence of the cotton culture

The South - Chapter 13. the south. section 1. the growth of the cotton industry. textile industry – growing cloth have

King Cotton - . ellen hicks. king cotton. “king cotton” can refer to many things: a diplomacy a march fabric a band a

Eli Whitney Invents the Cotton Gin - . after his conversation with the georgia planters, eli whitney put aside his plans

The Cotton Gin - . by: hope burks. who invented it. eli whitney's invented the c otton gin. he was born in

King Cotton - . http://www.dustydavis.com/blogimages/mississippi_cotton_large.jpg. cotton is a soft fibre that grows

Eli Whitney and the Cotton Gin 1793 - . by nathan hyre period 5. facts about eli whitney. whitney was born in westboro ,

Life in the Cotton Kingdom - . the rise of cotton in the south, the domestic slave trade, and the life of slaves in the

THE COTTON GIN - . cotton was a profitable crop but was not grown on a large scale because of the slow and difficult

16.3 Benchmark Review - . 8.7.1 describe the development of the agrarian economy in the south, identify the locations of

Notes 1 - . the road to the civil war. 1. southern slavery the peculiar institution prior to 1791 slavery was not