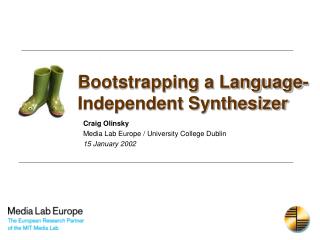 Bootstrapping a Language-Independent Synthesizer. Craig Olinsky Media Lab Europe / University College Dublin 15 January 2002. Introducing the Problem. Given a set of recordings and transcriptions in an arbitrary language, can we quickly and easily build a speech synthesizer? Bootstrapping - . (and other statistical trickery). reminder of what we do in statistics. null hypothesis statistical

Bootstrapping - . method for assessing confidence in nodes of a tree create a new data set by resampling characters

Bootstrapping - . bootstrapping: what is it?. general methodology define set of yielding products, these will generally

Towards a Language-Independent Universal Digital Library - . the second international conference on universal digital