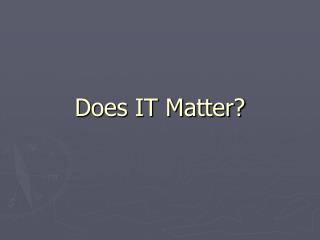 Does IT Matter?. Introduction By Thomas Stewart. notes that there are 3 perineal items new ideas truths (that should not be forgotten) disputes Carr started a dispute. IT expenditures grew to almost 50% of corporate capital spending by 2000 and then collapsed -- why?