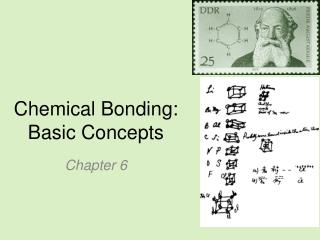 Chemical Bonding: Basic Concepts. Chapter 6. Why do atoms form bonds?. To become more stable. What is a bond?. A mutual electrical attraction between the nuclei and valence electrons of different atoms that binds the atoms together. Bonding Forces. Electron – electron

Chapter 8 - . chemical bonding. bonds. forces that hold groups of atoms together and make them function as a unit. we

Basic Concepts of Financial Accounting - . chapter 2. the basic accounting equation. financial accounting is based upon

CHEMICAL BONDING - . cocaine. chemical bonding. problems and questions — how is a molecule or polyatomic ion held