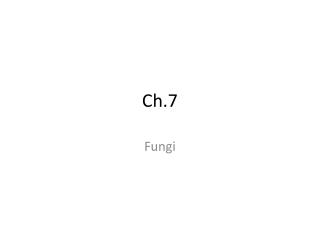 Ch.7. Fungi. Section 4: Fungi. What are Fungi? Fungi are eukaryotes that have cell walls, are heterotrophs that feed by absorbing their food, and use spores to reproduce Need moist, warm places to grow Eat moist food, damp tree barks, lawns coated with dew, and wet bathrooms.