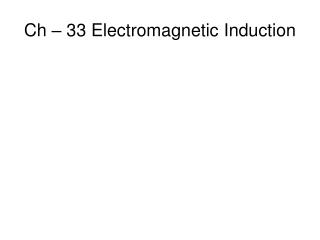 Ch – 33 Electromagnetic Induction . Reading Quiz – Ch. 33. 1. Currents circulate in a piece of metal that is pulled through a magnetic field. What is the correct name for these currents? a. Eddy currents c.Flux currents. b. Induction currents d.Faraday currents. Induction - . spring ‘09. dis here week. we begin the study of magnetic induction there will be a quiz on friday there

Induction of Labor - . by a.malibary,m.d. induction the process whereby labor is initiated artificially. augmentation the

Chapter 21 Electromagnetic Induction Faraday’s Law ac Circuits - . we found in chapter 20 that an electric current can