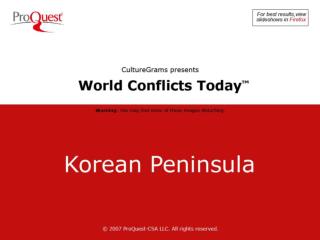 The crisis on the Korean Peninsula is really two crises: the ongoing conflict between North and South Korea and the high-profile nuclear standoff, principally involving North Korea and the United States. The Korean Peninsula Across the Ages - . presentation made by: michaela cotton. where is the korean peninsula?. politics.

Arabian Peninsula - . chapter 23 section 4. i can explain how the discovery of oil changed the arabian peninsula. i can

Kamchatka Peninsula - . by bianca and ariel. location. kamchatka region is located on far north-east of russia. the

The Antarctic Peninsula - . the baae team. sailing through icebergs and storms. the network of crevasses. crevasse