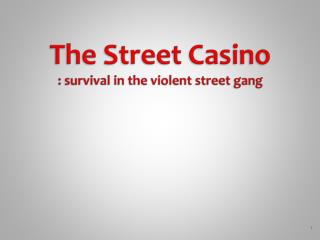 Tire Rack Street Survival - . teaching northeastern alabama teens how to drive to survive by ryan rupprecht. who is ?.

The Street Who works in this street

Voices from the street - . louise meincke expert consultation on promoting and protecting the rights of children working

Dubai The same street! - If you have ever wondered what happens to all that oil money the middle east countries collect

We Beat The Street - . done by: markeisha roberts. three quotes that are important. “boys who cause constant

ADDERALL AND THE STREET. - Adderall and the street. not just radiation. some regular side effects. fast or pounding

The street of crocodiles - . originally started off as a book written by bruno schulz which was a series of letters to a

We Beat the Street - . charles smith. three quotes. 1 “boys who cause constant disruptions in class never grow up to be