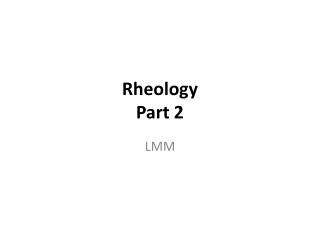 Rheology Part 2. LMM. Rheology of Visco-elastic Fluids. Why measure Visco-elasticity?. Viscosity and elasticity are two sides of a material’s property to react to imposed stresses Why Rheology? - . it is about material behavior the mathematics are simple but powerful it can be graphed for those

RHEOLOGY 1,2 - 4.1. and it is aimed to. … build up mathematical models describing how materials respond to any type of

Food Rheology - . an overview http://sst.tees.ac.uk/external/u0000504/notes/mscnotes/. the scope of rheology . the study