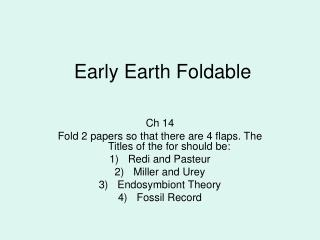 Early Earth Foldable. Ch 14 Fold 2 papers so that there are 4 flaps. The Titles of the for should be: Redi and Pasteur Miller and Urey Endosymbiont Theory Fossil Record. Redi and Pasteur— write bullet points and cut out and glue left 2 pictures. Early Earth Foldable - . ch 14 fold 2 papers so that there are 4 flaps. the titles of the for should be: redi and

Layers of the Earth – the Foldable - . or, how to color your earth layers foldable (if needed) and do your science

Early Earth Conditions - . origin of life beliefs. the big bang theory states that all matter and energy in the universe

The early Earth - . goal. to understand modern hypotheses and theories about the formation of the universe, our solar

The early Earth - . goals. to understand: (1) solar nebula theory for formation of earth, (2) how this led to earth ’ s

Hypothesis of early Earth - . about 4.4 billion years ago, earth might have cooled enough for the water in its atmosphere