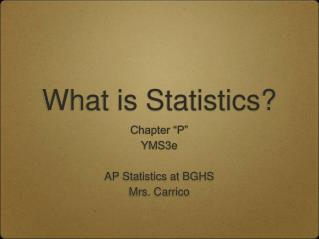 What is Statistics?. Chapter “P” YMS3e AP Statistics at BGHS Mrs. Carrico. Case Study. Can Magnets Help Reduce Pain? Read the study on page 3. What do you observe? Does there appear to be a difference between the reported Active and Inactive pain scores? BASIC STATISTICS For the HEALTH SCIENCES Fifth Edition - . by kuzma. chapter 1. statistics and how they are used.

For Chapter Statistics Administrators - . introduction to the sgi-usa web-based statistics program part 2 logging in to

Why Statistics? - . two purposes descriptive finding ways to summarize the important characteristics of a dataset

As much as I can say about Statistics in 60 minutes … - . thomas kyte http://asktom.oracle.com/. agenda. why do we

Review of Statistics 101 - . we review some important themes from the course introduction statistics - set of methods for

Descriptive Statistics Introduction to Summary Statistics - “in god we trust. all others must use data” – w.

Statistics for Genomicists - . wolfgang huber embl-ebi oct 2007. acknowledgement. many of the slides are from, or based