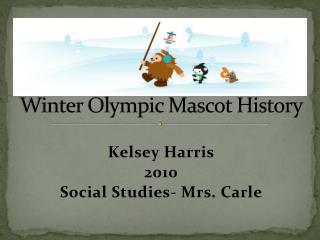 Mascot Activity - . objective #1 students will understand that evidence is not always self-explanatory, and therefore

The Proper Mascot - . arguments of judgement. how do you feel about it? do you like it? why or why not? what comes to

The winter olympic games sochi 2014 - . history of the olympic g

T he history of the Olympic Games - . in ancient times. the statue of zeus at

The 2010 OLYMPIC winter games - . by nick didora. canada is the country the 2010 olympic winter games took place. the

The History of… The Olympic Games - . ancient greece. the olympics were first held in olympia, greece – which gave