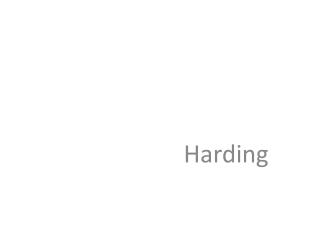 Harding. Election of 1920. Republicans nominated Warren G. Harding of Ohio (Calvin Coolidge as vice president) Platform was effectively ambiguous on the issue of the League of Nations Harding spoke of returning America to "Normalcy" Harding - . election of 1920. republicans nominated warren g. harding of ohio platform was effectively ambiguous on the

Elizabeth Harding - . unicef project. the girl and her bike. she was 12 years old she lives in ghana she goes and gets

HARDING University - . flying bison. a study of atmospheric properties as a function of altitude. major revisions.

The Harding Presidency - . mr. bermudez. daily question. when you get back from a vacation, how do you feel? are you glad

The Harding Administration - . after appointing several friends to positions in the government, president harding