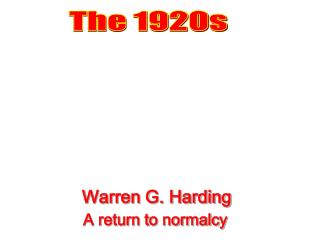 President Warren G. Harding - . an affable simpleton. harding on being president:. “i am a man of limited talents from

Day 73 Warren Harding - . dear old southland with his dreamy songs takes me back there where i belong how i would love

Warren G Harding-Republican Who Wanted a Return to Normalcy After the War - . think history is boring? harding doesn’t.

The Warren Harding Error and Putting Pieces Together - . the dark side of thin-slicing. rapid cognition can sometimes

Harding - . election of 1920. republicans nominated warren g. harding of ohio platform was effectively ambiguous on the

Elizabeth Harding - . unicef project. the girl and her bike. she was 12 years old she lives in ghana she goes and gets

HARDING University - . flying bison. a study of atmospheric properties as a function of altitude. major revisions.