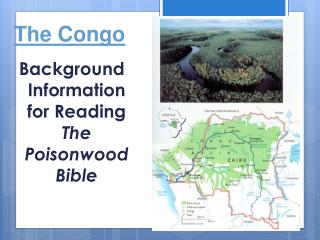 The Congo. Background Information for Reading The Poisonwood Bible. Quick Overview. What you should know: Geography- Including location, natural resources and natural features of the area Pre-Colonial History- Life before Europe’s takeover The Congo - Background information for heart of darkness. the congo. quick overview. what you should know: geography-

The Democratic Republic of the Congo (Congo-Kinsasha) - . by: zach rowells. geography. located in central africa,

The Congo Revision - . imperialism. a policy or belief in the creation of an empire by acquiring colonies b y military

Rape in the Congo!!! - . women for women international. the back story. for over ten years now, a war has been raging in

The Niger-Congo Languages - . general information. according to ethnoloque 1,532 languages → largest phylum in the