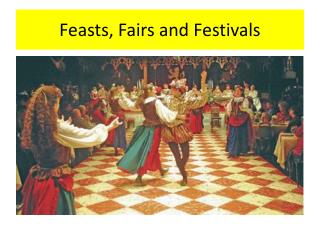 Feasts, Fairs and Festivals. All the fun of the fair!. What should I remember?. All year festivals…. Customs and festivals played an important part in Elizabethan life They were organised by the Church and took place at the same time every year Fairs and Festivals of Gujarat - The festivals and fairs of gujarat state are carried out with lots of fun, enjoyment and

Safeguarding Street Fairs and Festivals - Ones festivalgoers turn to when there is trouble. give each guard a map of the

Enjoy the Colorful Festivals and Fairs of Rajasthan - As you know that, the rajasthan is popular for its colorful life

FLAMENCO AND FAIRS. - Flamenco and fairs. spain. flamenco. it is a style of music and dance tipical spain . flamenco

Biblical Feasts - . introduction. according to common usage, a “feast” refers to a large meal, especially a

FALL FEASTS - . the feasts of yahweh. and yahweh spoke to moses, saying, &quot;speak to the children of israel, and

Primarily Fairs - Click on each slide to advance . primarily fairs. a look at the 1893 world’s columbian exposition and