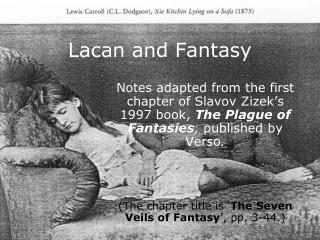 Lacan and Fantasy. Notes adapted from the first chapter of Slavov Zizek’s 1997 book, The Plague of Fantasies , published by Verso . (The chapter title is ‘ The Seven Veils of Fantasy ’, pp. 3-44.). Lacan and Fantasy - . notes adapted from the first chapter of slavov zizek’s 1997 book, the plague of fantasies ,

Reality and Fantasy - . reality means the story includes real events. which sentence is an example of reality? gus rode

Fantasy - . walk through the forest. you are walking through a forest. describe it. what do you see? what type of trees?

Fantasy - . the red pyramid by: sam barger book by: rick riordan. what is this power point going to talk about?. this

Fantasy - . by: jamie thompson. definition:. setting, events, and characters could not or do not exist classified under

Fantasy - . an introduction. definition:. usually a story in which a reality other than normal reality is used uses

Fantasy - . i’ve read all that, now what?. george rr martin. you know that one with the dragons?. patrick rothfuss. the