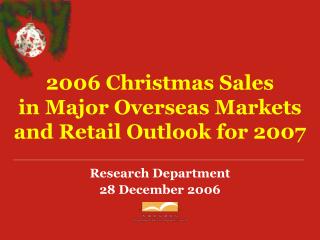 R&I: Automated Retail Market - Size, Share, 2013-2020 - The use of control systems in equipments of a retail store to

The Christmas - . christmas is a holiday observed generally on december 25 to commemorate the birth of jesus. christmas

From Chaos to Christmas - . experiencing the birth of christ biblically. #1 – the preparation matthew 3:1-10. “

A Look at the U.S. Total Retail Sales - . the data on the next slide consist of the total u.s. retail sales (excluding

RETAIL MIX - . this simulation challenges your ability to make business decisions affecting the sales for several