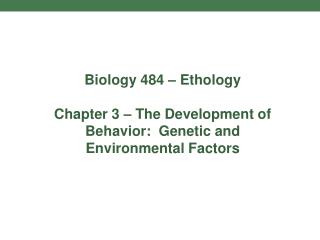 DNA: The Carrier of Genetic Information - . ap biology. how was dna discovered to be the chemical unit of heredity?.

Animal Behavior - Chapter 51. animal behavior. the theme of biology, which puts all aspects of biology into context:. the

Neuroscience and Behavior Chapter 2 - . what’s in this chapter?. what does biology have to do with our behavior?

Biology - . behaviors. content standard 6.2. responses to external stimuli can result from interactions with the

Chapter 3 Variations of Cost Behavior - . understanding cost behavior is fundamental to management accounting. there are