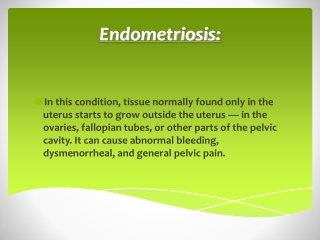 Endometriosis:. In this condition, tissue normally found only in the uterus starts to grow outside the uterus — in the ovaries, fallopian tubes, or other parts of the pelvic cavity. It can cause abnormal bleeding, dysmenorrheal, and general pelvic pain. Treating Menstrual Problems;.