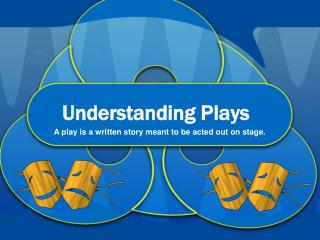 Understanding Plays. A play is a written story meant to be acted out on stage. How is a play different from a story?. Most of a play is dialogue, or the conversation between characters, and stage directions. Stage Directions Describe the Scene. Understanding the Role That Buyers Agent Plays - From looking for properties to final settlement, purchasing a property

Plays - . definition . a dramatic performance usually performed on a stage. parts of a play. cast/characters

PLAYS - . a film shows images on a screen. plays. a piece of music is a sequence of chosen sounds. plays. a painting is

ROLE PLAYS - . total of 14 relationship officers split into 4 groups each group gets a client scenario each group will

ROLE PLAYS - . total of 18 relationship officers split into 3 groups each group gets a client scenario each group will

SCRIPTED PLAYS - . the basics. basics of staging. tie it all together director’s “vision”: set, sound, costumes,

Radio Plays - . what is a radio