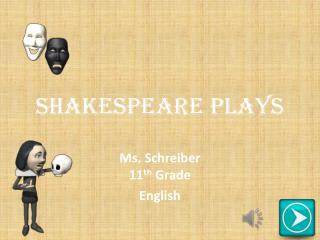 Shakespeare Plays. Ms. Schreiber 11 th Grade English. A Midsummer’s Night Dream. Romeo and Juliet. Macbeth. Much Ado About Nothing. Julius Caesar. Othello. Hamlet. Twelfth Night. Click the picture of the book to get to the specific summary. Review Questions. Romeo and Juliet. Snapshots of Shakespeare: His Plays - . starter 1/22/14. how many of shakespeare’s plays had you heard of before we

Plays - . definition . a dramatic performance usually performed on a stage. parts of a play. cast/characters

PLAYS - . a film shows images on a screen. plays. a piece of music is a sequence of chosen sounds. plays. a painting is

ROLE PLAYS - . total of 14 relationship officers split into 4 groups each group gets a client scenario each group will

ROLE PLAYS - . total of 18 relationship officers split into 3 groups each group gets a client scenario each group will

Understanding Plays - . a play is a written story meant to be acted out on stage. how is a play different from a story?.

SCRIPTED PLAYS - . the basics. basics of staging. tie it all together director’s “vision”: set, sound, costumes,

Radio Plays - . what is a radio