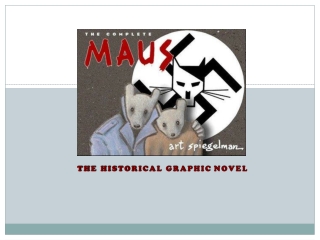 The Historical Graphic Novel. Art Spiegelman 1. Born in Stockholm in 1948 but grew up in New York His brother died as a child, and his mother committed suicide; he has a history of mental illness Worked for Topps Gum Co. for twenty years, creating novelty cards, stickers and candy Graphic Design - . the “look &amp; feel”. graphic design. it shares aspects of engineering, but with aesthetic,

The Complete Maus - Goals for this unit. to read and comprehend nonfictionto write personal reflections on the historical

Graphic Novels in the Classroom - . julia daley. when to use…. graphic novels are best used in the classroom when tied

GRAPHIC DESIGN I - . goals - creativity - inspiration. what is the goal of graphic design?. to create a visual solution