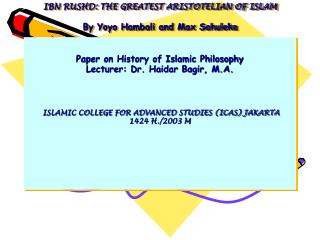 CHAPTER 10 THE MUSLIM WORLD, 600-1250 - . tolerance of other cultures and a focus on learning help muslim leaders build

Ibn Sina on Being By Y. Hambali Islamic College for Advanced Studies-ICAS

Jurisprudence - . by tori, paola, brad, and adam. the philosophy of law. the most common question a lawyer asks

MCQs Made Easy - . christine coombe dubai men’s college. introduction. why is this topic important for us? good tests

Scholasticism - . with all changes in western europe, there were several themes pertinent to our study. islamic influence

The Universities and the Printing with Movable Types