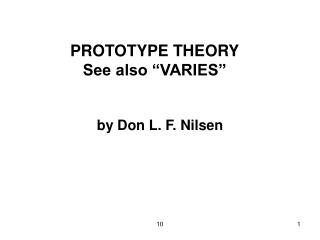 PROTOTYPE THEORY See also “VARIES”. by Don L. F. Nilsen. FAMILY RESEMBLANCES. The idea that members of a category may be related to one another without all members having any properties in common that define the category. EXAMPLES: Wittgenstein’s “games”- “chess” vs. “soccer” vs. “dice”. VSEPR Theory - . valence shell electron pair repulsion. vsepr theory: at the conclusion of our time together, you should

REALITY THERAPY - . choice theory. theory. created by william glasser enhanced by robert wubbolding it is based on choice

Cultivation Theory - . cultivation theory. developed by george gerbner in the late 1960s, it represented a shift from the