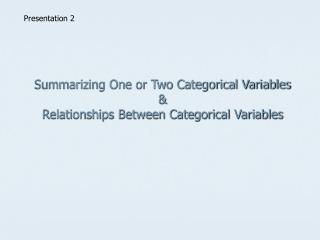 Random Variables - . an important concept in probability. a random variable , x, is a numerical quantity whose value is

THE MULTINOMIAL DISTRIBUTION AND ELEMENTARY TESTS FOR CATEGORICAL DATA - . it is useful to have a probability model for

Continuous Random Variables - . consider the following table of sales, divided into intervals of 1000 units each, . and

Stock &amp; Flow Diagrams - . james r. burns fall 2010. what are stocks and flows??. a way to characterize systems as