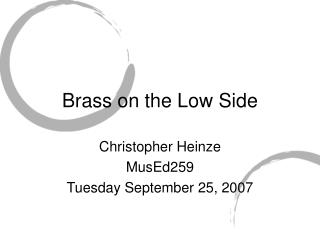 On the Wild Side - . creating wildlife habitat in your own backyard amy jordan k-state research and extension lyon

On the right SIDE - . exploring a new id model for distance education. txdla conference march, 2008. who are we?. michael

The Brass Family - . how they make sound. the brass player’s mouth buzzes and causes sound when put together with the

The Brass Instruments - . disclaimer for the you tube links listed in this power

The Brass Book - . a step by step guide to caring for your trumpets, trombones etc. by greg moore. disassembly . how to

Brass - . brass. made out of brass or other types of metal the player buzzes his/her lips on a mouthpiece . this causes

The Low Down on… - . puns. also called paronomasia is a form of word play which suggests two or more meanings, by