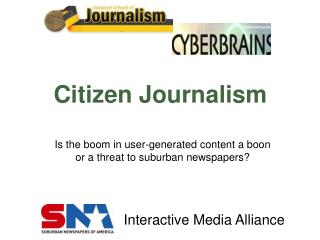 Citizen Journalism Is the boom in user-generated content a boon or a threat to suburban newspapers? Journalists, researchers, dreamers

CITIZEN JOURNALISM - . can citizen journalists be considered ‘journalists’? – justify your response through the use

Field monitoring/Citizen Journalism - . aasim zafar khan. what will fms be doing?. monitoring the elections in their

Journalism - . exploring the facets of industry and the variety of skills required. journalism skills. reporting writing

Journalism - . the job of a journalist. in the career of journalism, there are many long hours &amp; an unpredictable

Journalism - . 12-2 english. what is journalism?. t he act of researching and reporting news (ranging from current events

JOURNALISM - . writing for the news - a quick primer. different types newspaper articles we will be talking about today:.

JOURNALISM - . gabby &amp; darian. what is it….?. reporting of a variety of events gathering of information through