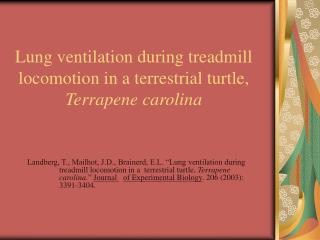 Predictors of Hypoxia during One-Lung Ventilation

Ventilation/Perfusion Ratios in the Lung - . o 2 transport in the blood. o 2 is bound to hemoglobin (hb) for transport in

Tracking Severity and Distribution of Lung Disease During Mechanical Ventilation: - Applications to bronchoconstriction

The Effects of PEEP on Oxygenation during One-Lung Ventilation

Locomotion in a physical world - . most animals have some form of locomotion which separate them from plants and fungi

Eastern Box Turtles ( Terrapene carolina ) A Presentation By: Nicole Routon And Shelby Packer - . characteristics. has a

LOCOMOTION - . locomotion . change in position of an organism survival value of locomotion 1. get food and shelter 2.

Locomotion - . locomotion. locomotion: the ability to move from one place to another motile: capable of locomotion

Locomotion - Essential questions. why did mobility evolve? what is the physics of movement? what forces need to be