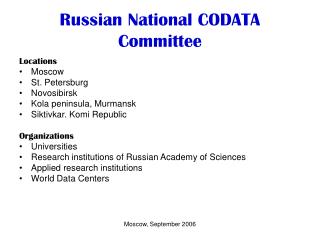 CODATA - . john broome codata treasurer. what is codata?. codata, the “committee on data for science and technology”,

The Russian National Emblem - . the russian national emblem is the golden double-headed eagle with a horseman ( st

The Board on Research Data and Information (BRDI) and U.S. National Committee for CODATA - . director’s report to the