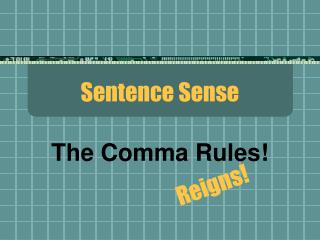 Sentence Sense. The Comma Rules!. Reigns!. Overview. Sentence building jargon The basic types of sentences What NOT to do The Comma Rules The Semicolon. Every sentence must have these three things. Subject Verb Complete idea. Phrase Clause. A bunch of words with NO subject or verb

Sentence Sense - . word wise. parts are parts. reading round-up. write on. a sentence that tells you something. buy a

Sentence sense - Uhcl writing center. sentence sense. c. s. lewis. we all want progress, but if you're on the wrong road,

Sentence Sense - . what you need to know about sentences all sentences are made up of: words —which are the smallest

Sentence Sense - . word wise. parts are parts. reading round-up. write on. a sentence that tells you something. buy a

Topic Sentence Sentence #1 Sentence #2 Sentence #3 Sentence#4 - Give the basic definition of the who or what. topic

Sentence or Sentence Fragment? - . watch the following video:. http://www.youtube.com/watch?v=fduxxdmhisw according to

Sentence Structure: Sentence Types - . a sentence. must have a subject and a verb (predicate) must have a complete

Sentence &amp; Sentence Fragments - . sentence. a sentence is a group of words that tells a complete thought. a

Sentence - . what is a sentence ?. sentence . sentence is a group of related words which has subject , verb , object and

sense - . chirpy gave everyone at the center a ______ of togetherness that was stronger than it had ever been before.