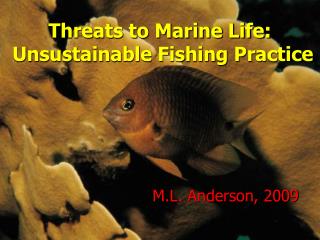 Top Threats to Marine Life - . may 2012. overfishing. what is it? what does it do? tragedy of the commons bycatch.

Human Impact on Marine Life Over Fishing Marine Biology - . warm up. how does fish get from the ocean to your plate? what

Marine Life and Adaptations to the Marine Environment - . overview. more than 250,000 identified marine species most live

Pressure that threats life - Blood pressure that most of aged person falls under. the complications are very dangerous it

Marine Life Biome - . by lukas struppe. basic facts to know before you read this. click to enter the de ep s ea. the