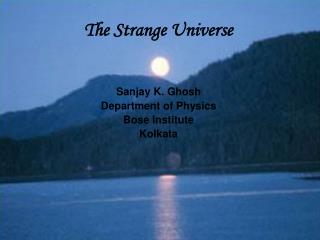 Life, the Universe and GUI Design - . by mike miserendino. 42. what is the question?. where do we start?. requirements.

Physics 270 – The Universe: Astrophysics, Gravity and Cosmology - . the history of cosmology. mythology vs the

Evidence for Large Scale Anisotropy in the Universe - . pankaj jain i.i.t. kanpur. introduction. universe is known to be

There is nothing so powerful as truth and often nothing so strange. Daniel Webster - . all time management begins with

Up to now – Cosmology believes that our Universe came/began from nothing. But - Simple physics &amp; new studies