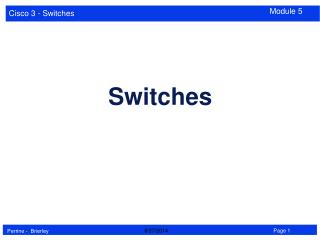 Switches. NOTE: The following is Cisco’s logical idea of planning a LAN. Their design is an approach but not the only one . Medium & smaller companies will depend on the ideas of their people to come up with design criteria – this is where the Cisco planning criteria can be used. Switches - . a switch allows you to “make” or “break” the connection between two or more points in a circuit.

Switches - . what are some examples of a switch?. light switch touch lamp thermostat can you think of any others?. fyi -

Solenoid Switches - Jumps manufactures, export and supplies solenoid switches for all its models of starter

Debouncing Switches - . mechanical switches are one of the most common interfaces to a uc. switch inputs are asynchronous

Optical Switches - . mohd nazir shakeel. introduction. in a mems optical switch, a micro-mirror is used to reflect a