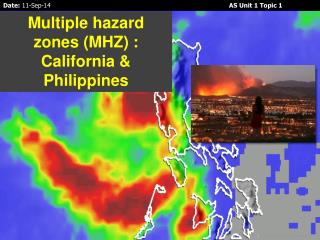 Multiple hazard zones (MHZ) : California & Philippines. Aims To identify and define hazard hotspots. To understand the issues regarding managing MHZs. To look at the hazards in California, their effects and how they are being managed. Time Zones - . earth science chapter 6. earth is divided into 24 time zones, each about 15 degrees of longitude wide and

EOA 13: JOINT OPERATIONS IN THE PHILIPPINES I - . end state: reoccupation of the philippines is a united states

Introduction to the California Governor’s Office of Emergency Services Hazard Mitigation Branch - . what is hazard

Use of Coastal Zones - . essential question. how are coastal zones used by humans? what is the importance of coastal

Where is Harm’s Way? (Mapping Disaster Risk in the Philippines) - . department of environment and natural resources