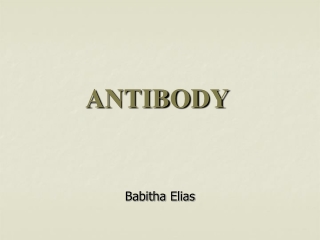 ANTIBODY. Babitha Elias. DEFINITION Antibodies are substances which are formed in the serum or tissue fluids in response to an antigen. Antibodies react with antigen specifically and in an observable manner. Antibody Identification - . mohammed jaber. antibody presence . presence of an antibody may be indicated by the following

Practical Blood Bank - Adsorption. definition: the removal of antibody from serum by combining a serum sample with

Chia-Ho Lin Ph.D. - Immunohistochemistry is a method of detecting the presence of specific proteins (antigen) in cells or

Lecture 5 Antibody genes I - . problem of the generation of diversity v(d)j recombination surface immunoglobulin b

When can you use an antibody to find another antibody? - . immunohematology. the antiglobulin test. basic principle,

ANTIGEN-ANTIBODY REACTIONS - . babitha elias. antigens and antibodies combine with each other specifically and in an