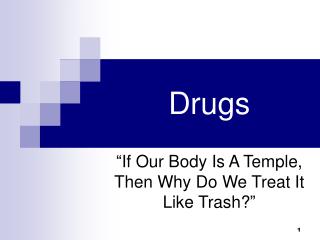 Drugs. “If Our Body Is A Temple, Then Why Do We Treat It Like Trash?”. Bell Ringer #1. Test your Drug IQ Textbook, pg. 402 Evaluating Media Messages What’s your verdict Textbook, pg. 403. Prescription Drug Abuse -Myth or Fact?. Rx drugs provide a medically safe high