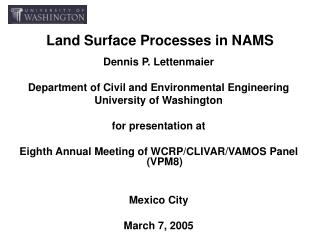 Land-Surface Modeling - . 19 november 2012. thematic outline of basic concepts. what are the physical processes that are

Why Land Surface Models are needed? They provide an explanation of surface processes - Joint assimilation of in-situ and

Surface Processes and Landscapes - Weathering and erosion. weathering is the chemical and physical breakdown of rocks