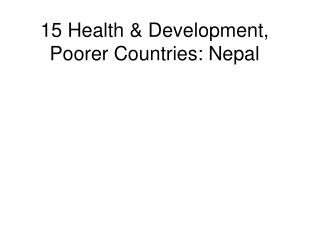 15 Health & Development, Poorer Countries: Nepal. Learning Objectives. Identify factors known to be associated with health outcomes in poor countries Describe possible theories for why countries end up with the health they do? Soil Erosion in Nepal - Welcome to nepal. soil erosion in nepal. a case study of the causes and solutions used to tackle

Why the Rich are Getting Richer and the Poor, Poorer - . robert b. reich.

Examining Early Child Development in Low-Income Countries: A Toolkit for the Assessment of Children in the First Five

Rich Countries versus Poor Countries - . choose from the words below the ones that are related to rich countries and

Evaluation and Evidence: Applying guidelines for health IT evaluation in developed and developing countries - . nicolette