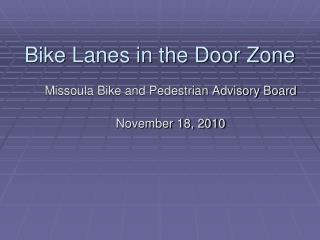 Bike Lanes in the Door Zone. Missoula Bike and Pedestrian Advisory Board November 18, 2010. Relevant BPAB Duties per MMC 5.60.070. #5 – Make recommendations to the city regarding design standards for all types of bicycle and pedestrian facilities; St. Louis w/ bike lanes - . by: goon sup cha. why we need bike lanes. given that the st. louis area has the highest

Survey Finds That Buffered Bike Lanes Are Better - A bike lane provides a designated lane for cyclists to ride on. they

The Best Places to Kayak and Bike in Door County - With 5 state parks, 1 state trail, and 19 parks, in addition to many

In The Zone - . using technology to differentiate. http://schools.spsd.sk.ca/curriculum/techyteacher /. technology both

Changing Lanes - . moving from right-hand lane to left-hand lane turn your head to check traffic behind you and on your

Passing Lanes - . 1. a petition to increase convenience and safety along arizona state highway 64. purpose. the purpose

“The Bike” - . what was one conflict the main character faced in the bike ? (remember a nswer, p rove, e xplain+