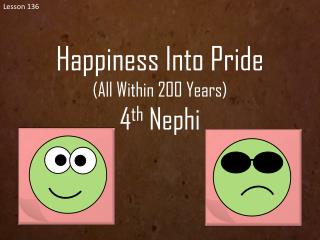 Lesson 136. Happiness Into Pride (All Within 200 Years) 4 th Nephi. What is This Book About?. The blessings that come to people who are united in living the gospel of Jesus Christ. 136 countries covered - . victims. most detected victims are women…. …but the share of men is increasing.

CS 136, Advanced Architecture - . storage. case for storage. shift in focus from computation to communication and storage