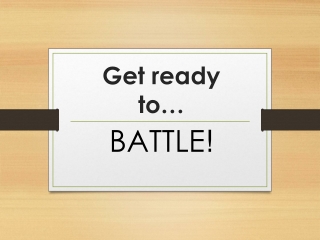 Get ready to…. BATTLE !. The Basics. Elementary Book Battle. Read 12 great books! Check them out from the library. Get a study guide and take good notes. Remember as much as you can about the books by discussing them and answering practice questions. Welcome to i-Ready® - . welcome to i-ready. this year, your child’s school will be implementing i-ready, an engaging

THE READY BY 21 CHALLENGE: - . ensuring that every young person is ready for college, work &amp; life. thaddeus

College Ready or Career Ready? The Same or Different - . myth or fact?. nationwide about 70% of students entering high

ARE YOU READY? - . sometimes we can have good intentions on being ready to serve god, but it doesn’t always work out

Are You Ready for a Resident? - . is your resident ready for abc?. residents need to complete all of the ncope

Ready or Not? - . determining the readiness of your institution for an erp implementation. author: jennifer s. higgins,

ASL 1- Get ready for presentations! begin in 10 min.or so ( get your comp. books ready)  - . grade recovery reminders-

Come for everything is now ready - . luke 14:7-24. the great banquet. be humble be compassionate be prepared. come for