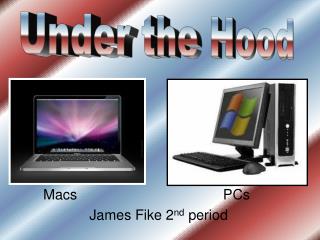 Under the Hood. Macs PCs James Fike 2 nd period. Where to save files to. Flash drive Hard drive E-mail to self Student folder CD-Rom Cloud. 3 types of software. 2 ND PERIOD!! - . everyone needs to get their rsg (reading study guide thick books) out and on their desks before class