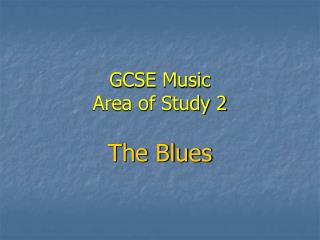 GCSE Music Area of Study 2. The Blues. Influence. Much of the structure of todays pop music has been shaped by the blues music of the early 20 th century. 1800 USA. Before the US became independent four countries occupied America. Can you name them?. The four countries are. Great Britain GCSE Music - . there are three elements to the course: composition listening performing the following slides will give

GCSE MUSIC - . edexcel – 1mu0 inspiring. what do i need to know, or be able to do, before taking this course?. you have

Area of study 2 - . how old is that fossil?. fossils tell us what kinds of organisms lived in the past, but how do

GCSE Music Revision - Edexcel specification 2009. gcse music revision. this only covers the essentials for the listening

GCSE Music Course Overview - . september 2009. why study music ?. it plays a huge part in most people’s lives. most