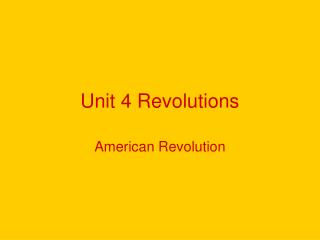 UNIT 2: Revolutions! - . feel free to create a cover page later in your notebook to mark the beginning of our new unit. .

Assignment #1: Political Revolutions Unit Intro - . brainstorm/discuss: what are some reasons people might want a totally

Assignment #1: Political Revolutions Unit Intro - . brainstorm/discuss: what are some reasons people might want a

Unit 3: The Enlightenment and Revolutions - . during this unit, you will:. know the key ideas enlightenment thinkers,

Revolutions - . world history . loose control hindered the colonies in britain when the profit started to be made, new

Revolutions - . india day 1. index card quick quiz. what country in asia is home to the himalayas and gandhi? what

Revolutions - . “q” what is revolution?. revolution is a complete change. this change does not have to be violent,